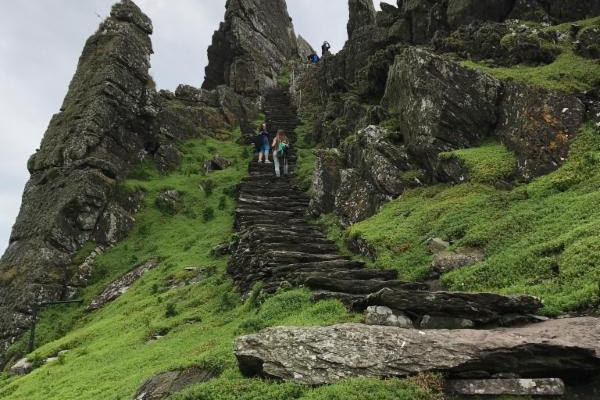 One of The surprising additions to our travel in Ireland was a Frances-requested trip to see puffins off the southwestern coast. The destination she hoped to visit was an island that required a boat ride from the main island. After doing a very little bit of research to this late find for our trip, we discovered that reservations must be made a year in advance to travel to mysterious Skellig Michael Island to see the puffins in their natural habitat. The excursion was weather dependent and cancellations were rare. But we were instructed to call at 6:00 A.M. to see if there were seats available.

Before we go any further, have you seen a puffin? There are cute little penguin-like birds, and they are rather irresistible to watch. Secondly, have you seen the face of a disappointed daughter who had no idea that irresistible puffin island would be so difficult to attend? I had prepared the speech, “We will have to visit the puffins another time, they are booked solid and they have no room on the boat.” Captain Billy said instead, “You much have brought luck with you today, I have had three cancellations. Meet at the dock in an hour and a half.”
The travelers were in bed at the moment and hour and ten minutes away from the dock. We had planned to travel the scenic Ring of Kerry that day and our trip to the dock would cover about sixty percent of that circle. The gray clouds covered the green hills with a haze that might place the trip in jeopardy even if we made the boat in time.
Skating in, as the boat was ready to pull away, we began an hour long ride in waves that were a challenge even for our tour boat. The guide began to tell about the monastery atop Skellig Michael. In the year 600 A.D. monks made their way out to what they understood as the edge of the known world to be closer to God. We were making a motored trek that others had made with great labor in an effort to find God through a life of silence and devotion. What about the puffins?
We reached the landing, moored just long enough to skip up narrow steps to a worn path.
There was little silence. The cute little puffins were besieged by gulls from the neighboring Little Skellig Island. The thousands of puffin were honking, purring and squeaking at the visiting Storm Petrels (gull like birds) trying to make the landing with great screeching and honking. If the monks made a vow of silence it would have been easy to keep in the noisy nature conversation.
Once we made it up the path to the place to ascend the holy hill we meet the resident archeologist who briefs us of the great dangers in climbing the 600 uneven and ever shifting flagstone steps. After attempting to genuinely scare us with stories of injuries and fatalities she invites us to climb slowly and with great care. Why would a community of monks, travel to bird covered, a rocky foreboding island to be close to God? To see the puffins?
Over three thousand, four hundred years ago, pre-Celtic Danann folk shipwrecked at Skellig and mark the first recorded visit to the mystical island. Some fifteen hundred years ago warring clans of early Irish kings used Skellig for preparing for an attack, retreat after an attack and subsequent attack while in hiding. This jagged and rocky out crop some seven miles off the main shore. The monks who attempted to be secluded were attacked by Vikings and all manner or folks who made this inhospitable place rather busy for all the bird-life and plundering of travels.
Never the less, for six hundred years, (600-1200 A.D.) generation after generation build not only a rocky path, beehive-shaped huts, a chapel, garden and other structures atop this forsaken and difficult spot. Their surviving desire was to meet God on the edge of the world. As I climbed down from our visit to the monastery I met friends from a previous church. (You just can’t get away from folks, can you?) How remarkable that I come to the end of the world and find people I know through the church.

This location shares a more modern fame as the location of Star Wars, Luke Skywalker’s hiding retreat, where he too attempted to separate himself from the rest of the universe. In a beautiful and yet rugged outpost, we find the crossroads of the edge-of-the-world AND the God-is-with-us. Jonah was trying to get away from God while traveling to Tar shish and God finds him. Christ promises that nothing can separate us from the love of God, not puffins, history, or slippery stones in a distant land.
It became clear that our journey to this place was an important rediscovery: We live in a world where the church is on the edge of the known society and we find it a rocking and inhospitable place to live out our Christian faith. We cannot hide in the history of faith. We cannot seclude ourselves to protect our faith. We cannot expect enemies nor creation to step aside, we are called to forge steps through life the bring us together in Christ.
We went looking for puffins and found Jesus continuing to be shared on Skellig and now back at Rock Spring. Go take your steps of faith and share Jesus with the world and bring God to a searching and sometimes the warring world.

One thought on “Finding God at the Ends of the Earth”

This site uses Akismet to reduce spam. Learn how your comment data is processed.